The Definitive Mold Resource  |  Learn more about mold and how to deal with it. 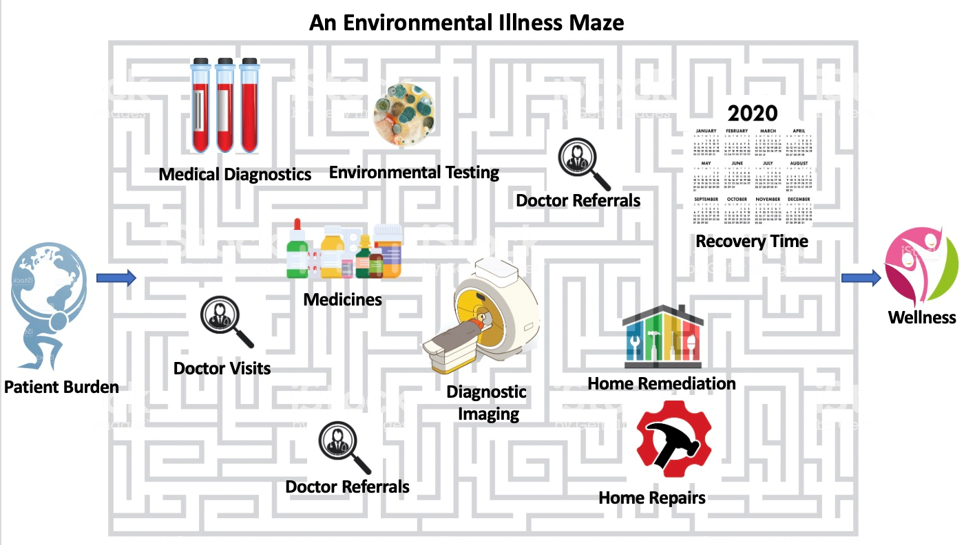 Patients Carry the Burden of Getting Well from Mold Mycotoxin Poisoning.  Why is that?

While there is no controversy regarding the poisonous nature of mycotoxins, the state of environmental illness diagnosis remains in its infancy.  This is due to the numerous uncontrollable variables involved with mycotoxin exposure that makes traditional medicine and research ineffective.  Existing research methodologies have issues documenting the cases in a manner where conclusive medical conclusions can explain the direct relationship between positive testing for mold in a home and the direct cause of an acute illness.  Keep reading about Toxic Mold:

An article published in Clinical Microbiology Reviews in 2003 discusses severe illness resulting from acute exposure to moisture and mold damaged homes, particularly Stachybotrys chartarum, (the specific Toxic Green/Black Mold often referred to in literature). The article explored mold related illness outbreaks where mycotoxin exposure was clearly caused by a water damaged home; however, the circumstances and complexity of the mycology of mold coupled with research protocol makes the clear connection a confusing situation.  This renders the ability to tie mold exposures together in a systematic way inconclusive for medical research.  Since the writing of this article about toxic mold back in 2003, there have been a number of natural disasters in the form of hurricanes and flooding that have crippled entire cities.  It is the environmental communities’ hope that the significant increase in water damaged home exposures will provide enough real time information to study the exposure disease link and provide peer-reviewed, widely accepted papers on the subject.

Even with recent technology developments, precision of diagnostics, and significantly more cases, traditional medicine will likely remain ineffective for the simple reason that physicians are not trained in diagnosing and treating environmental medicine.  Generally speaking, physicians simply do not even ask questions about the home environment.  In fact, physicians are burdened by tighter schedules and higher volume of patients seen per day, reducing their ability to probe for the illness root cause.

The identification of amplified mold growth in the home combined with biological testing for physical evidence of fungi and mycotoxins is required for a diagnosis.  When a patient presents several of the many symptoms of mold and mycotoxin exposure, they often find themselves in an endless chain of diagnostics designed to rule out other better-known potential causes. Thus, mold/mycotoxin exposure is often a diagnosis of exclusion and is only a possibility if the physician considers environmental illness. The patient bears the burden of determining if their environments are creating, or contributing, to their health issues.

About the Mycotoxin Producing Molds and Other Microorganism Relationships

There are an estimated 2-4 billion fungi species in the world.  300-400 are known to produce mycotoxins.   However, there are at least 21 different mycotoxin classes (with over 400 individual toxins produced by at least 350 fungi known). This makes determining a causal relationship with the disease symptoms extremely difficult.  All mycotoxins are complex organic compounds (sticky chemicals) of 200 to 800 Daltons and are not necessarily volatile at all times.

Many classes of mycotoxins are produced by a variety of fungi.  The chemical toxins within a given environment are dependent on the conditions from which they were produced.  These include variations in nutrients, moisture, competition with other biological organisms, and other environmental factors.  Common mycotoxin producing molds feed on the same cellulose nutrients (cellulose materials like paper and gypsum in drywall and paper backed insulation used in most homes). In addition, many molds cohabitate with each other.  The large number of these variables renders the knowledge of these toxins limited.

The slow pace of advancement is analogous to many other disease states.  For example, diabetes management has witnessed advances in the understanding of the disease for the better part of a century.  Even today, new understandings of diabetes are resulting in changes in nutrition and pharmaceutical medications used to manage the chronic disease. In addition, other diseases of exclusion have overlapping symptoms with mold and mycotoxin poisoning.  Chronic fatigue, Lyme disease, Fibromyalgia, Epstein Barr Virus, hormonal irregularities and other chronic disease diagnosis are sometimes the “go-to” diagnosis of exclusion for physicians.

A water damaged environment also contains a wide range of microorganisms including bacteria (e.g., Legionella, E. Coli., Actinomyces, and other gram-negative and gram-positive species), mycobacteria, and other mold species and their secondary metabolites that include endotoxins and mycotoxins. The difference in nutritional and growth requirements of the organisms may also explain the lack of specificity from many cultures and contribute to the underreporting of toxic strains such as Stachybotrys or Chaetomium. These molds grow more slowly than other species, leading to overgrowth by other molds.

In flood and other water damage scenarios, there may also be a much higher bacterial load than fungal load.  Thus, the direct causal relationship between damp housing and illness will always be complicated due to the inevitable existence of a variety of bacteria, mold, mycotoxins, pollutants, radon, volatile organic chemicals, second-hand cigarette smoke, ozone, and the ubiquitous use of formaldehyde in building materials and furnishings.  Physicians do not know where to start.

This “alphabet soup” of contaminants makes establishing a direct causal relationship between any one mycotoxin and severe illness nearly impossible.

The vast amount of knowledge known about toxic mold involves digestion.  This is due to the ability and simplicity of examining outbreaks involving animal populations throughout history.  Since animals share living space, eat the same foods, and endure the same weather conditions, a causal relationship can be reached.  There is also the unfortunate circumstance where diseased cattle or horses are euthanized as part of the solution.

Because of the incredibly small size of mycotoxins, they have the ability to remain attached to mold spores and mold fragments in the air or attach themselves to dust.  It is believed that inhalation of mycotoxins is the likely cause of environmental illness where the patient presents respiratory, sinus, and neurological symptoms.  Of course, mold can also act as an allergen, an antigen, and an infectious agent.

Mycotoxin testing of urine and dust is available at a select few labs in the US.  These labs employ one of three methods,

Immunochip Technology (microarray platform). This is the fastest and most sensitive testing, however it is also the least validated and believed to have wide variability in analytical results.

These laboratories all have lab certifications; however, the mycotoxin testing methods are not FDA approved.

Testing for mycotoxins in humans is most commonly done using a urine test that is sent to one of a few labs that test using one of these three methods.  These labs are limited and only test from 11-31 mycotoxins believed to be relevant for up to 40 common types of mold found in water damaged homes and in food products.  Personal costs range from $300-700 per panel. Insurance coverage is limited to a very few plans.  Patients must check their insurance for coverage.  Cash payment is expected at time of service with patients responsible for filing insurance claims.

Urine tests have limitations and can vary from sample to sample due to fluid uptake diluting toxin concentrations.  Other variable factors include antioxidant intake or supplements and time between sample and actual lab testing.  Many doctors recommend provoking mycotoxin release with glutathione prior to collection of a urine sample.

Example of Fungi related Deaths and the Complications with Drawing Conclusions

Cleveland Pediatrician Door Dearborn encountered three patients (babies) with lung hemorrhages on the same day in November 1994. Lung hemorrhages are rare in infancy, occurring in about two out of 10 million babies per year.  When discussing with his colleagues at Rainbow Babies and Children’s Hospital, he learned that four other infants had been diagnosed with similar sudden lung hemorrhages of unknown origin during the previous year and a half. He informed the CDC immediately and an investigative team was sent to assess the situation.

The researchers found that all 10 infants with lung hemorrhages lived in eastern Cleveland, an area of older homes near Lake Erie. Further investigation revealed that the homes of all the babies treated for lung hemorrhages had experienced either major flooding or chronic leaks within the preceding six months.  Further investigations revealed high levels of Stachybotrys in the homes of infants treated for lung bleeding. As the investigation continued, 2 of 11 more infants died from lung bleeding while being treated by Dr. Dearborn. This received significant national press prompting Cleveland authorities to recommend  clean-up and disposal of all moldy materials in water-damaged homes. The coroner also reopened case files and reexamined tissue samples from 172 infants who had died suddenly during the same time period. In this group, six more infants were found to have had previously undetected lung hemorrhages as well as other symptoms suggesting exposure to Stachybotrys. The cases clustered on the east side of the city in a low-income neighborhood with older, wooden houses, some of which have not been kept in good repair by landlords.  All were in the same zip code.  It was concluded that inhalation was the rout of infection due to the illness being presented in the lungs.

In the aftermath, fungal exposure was determined to be a potential cause of a percentage of infant deaths attributed to SIDS (Sudden Infant Death Syndrome).

Years after the Cleveland infant cases, numerous experts challenged the methodology of the study.  They cited inconsistencies in time elapsed between the time of the disease onset and home testing.  Air tests were conducted under abnormal conditions: Some testers used vacuuming, others banged on radiators to stir up spores, and there was disagreement among microscopists about whether Stachybotrys spores were actually present in air samples. They also questioned the study design of a 240 question survey given to the parents.

In the end, a final presentation stated , “It is our personal opinion that there is currently no clear evidence documenting that mycotoxins cause health effects among building occupants.” (Drs. Elena Page and Douglas Trout of the Hazard Evaluations and Technical Assistance Branch of the National Institute for Occupational Safety and Health in Cincinnati), a real blow to the acceptance of mycotoxin related illness.

As you can see, environmental illness is poorly understood and addressed in today’s medical environment.  That said, mold/mycotoxin illness is very real, and patients struggle with learning more about their ailment and where to seek treatment.  Many people have been treated and have taken back their lives.  Others can endure severe illness for a lifetime. Some pass away due to organ failure and other similar causes.

While the state of medicine and science has its challenges to understanding environmental illness,  sick patients need to do something.  Testing one’s home is relatively inexpensive and can start the quest for treatment.  It is when you clearly identify mold or water damage in your home that you should seek professionals to remove it.   Testing also provides guidance to seek physicians who practice integrative medicine and treat mold.  This saves, time, expense, and human costs.  When there is a moldy home, every family member can be exposed.

The following activities are cost effective means to begin the process of evaluating your environment for mold contamination.

If you would like to share your story or ask questions, please comment on this article.  I can also be reached directly at cesarcollado@icloud.com to talk about toxic mold.